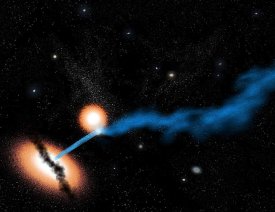 For the first time ever NASA astronomers spotted a supermassive black hole that blasts its galactic neighbor with a deadly beam of energy.

The "death star galaxy," as NASA astronomers called it, could obliterate the atmospheres of planets but also trigger the birth of stars in the wake of its destructive beam. Fortunately, the cosmic violence is a safe distance from our own neck of the cosmos.

"We've seen many jets produced by black holes, but this is the first time we've seen one punch into another galaxy like we're seeing here," said Dan Evans, astronomer at the Harvard-Smithsonian Center for Astrophysics in Cambridge, Mass. "This jet could be causing all sorts of problems for the smaller galaxy it is pummeling."

A bright spot in a NASA composite image reveals that the beam is striking the edge of the smaller galaxy, deflecting the spindle of energy into intergalactic space. While not a direct hit, astronomers said the consequences are frightening.

"This is a fascinating result, and we can be glad that we're seeing it from a safe distance," said Neil deGrasse Tyson, an astrophysicist at the American Museum of Natural History in New York who did not contribute to the study. "Knowing how lethal the radiation from the jet could be, I wouldn't want to be anywhere near its line of fire."