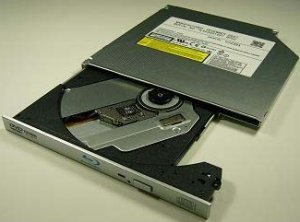 Panasonic has unveiled a new Blu-ray drive for notebooks that is only 9.5mm thick:

Panasonic's latest burner for laptops is down to a mere 9.5mm thick, easily besting the company's previous 12.7mm Blu-ray drives. The drive can read and write Blu-ray discs at 2x, and supports DVD and CD read / write functions aplenty. Toshiba is on record claiming that HD DVD burners can be slimmed down to 7mm and will eventually be besting Blu-ray in this category, but so far only DVD has gone that slim.

The device will be launched next month at CES.