52-inch Multi-touch Screen – World’s Largest Multi-touch Display
LG.Philips LCD’s 52-inch multi-touch panel for public and interactive displays is not only the world’s largest, it is also one of the most responsive, able to recognize input from either a touch of a finger or more precise writing instruments. It uses an infrared image sensor that gives it the ability to recognize two separate touch points as well as gestures. It boasts some of the industry’s highest specifications, with a 90 Hz touch response time, 1920 x 1080 Full HD resolution and a light transmission rate of 95 to 100 percent.

47-Inch Triple View LCD – World’s Largest and Highest Resolution Triple View Display
LG.Philips LCD’s 47-inch Triple View LCD features Full HD 1920 x 1080 resolution, can reproduce 1.07 billion colors and has a brightness of 250 nits. This display is an ideal solution for applications such as store directories and advertising at shopping malls. By splitting the light from the panel into separate paths, it is able to show three completely different images to people standing at different angles relative to the display.

42-inch Transflective LCD for Outdoor Use
LG.Philips LCD’s 42-inch transflective display for outdoor use boasts an impressive 1,500 cd/m2 luminance in outdoor light, greatly improving daytime readability. The display is equally effective at night, relying on the power of its backlight. By adopting a special transflective technology, LG.Philips LCD has developed a backlight that greatly enhances the viewability of an LCD panel during all times of the day.

84-inch Multi-vision Multi-touch LCD for Interactive Public Displays
LG.Philips LCD’s flagship multi-touch display is an 84-inch model created by conjoining four 42-inch panels in a two-by-two array. This acts as a single enormous display with multi-touch capabilities across its entire surface. A screen bezel width of only 15mm, which is 40 percent smaller than the average bezel, adds to the panel’s seamless look and feel. The display also has Full HD 1920 x 1080 resolution, an omni-directional 180-degree viewing angle and impressive 500 cd/m2 brightness. 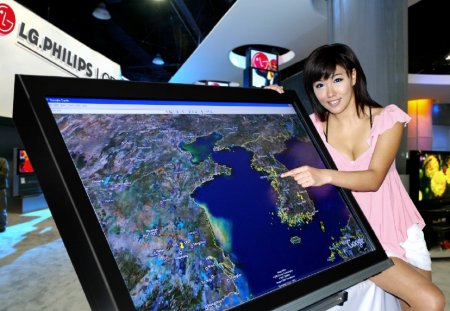