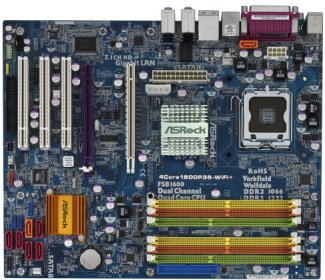 ASRock has unveiled the 4Core1600P35-WiFi+, the company's first motherboard designed for the high-end market. This board uses the Intel P35 chipset and features build-in WiFi support:

In addition to solid capacitors and overclock control software, the motherboard features the Realtek ALC890 chip for sound, and also built-in IEEE 802.11g.

ASRock is also planning to soon launch motherboards adopting Nvidia's nForce 650i and 680i chipsets, according to the company.

Although the new product lines mean that ASRock has begun to step into Asustek Computer's motherboard market, the two will not become competitors, and instead will cooperate with each other. ASRock will continue to focus on the entry-level market, while mid-range and high-end products will account for 30% of the company's total motherboard shipments, noted Sterling Wu, president of ASRock.

Wu says ASRock is trying to raise the average selling price of its motherboards and will aim to deliver a better price/performance ratio.