First there's the MaxOrb EX, this is a new cooler with a mirror-like copper base, copper fins and six radial copper heatipes. ThermalTake says it's designed for extreme silence and maximum cooling. The MaxOrb EX ships with a VRFan Speed Control so the user can control the fan's speed. 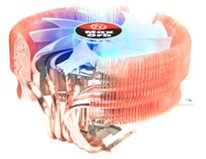 Next we have the BigTyp VP, this is a processor cooler that features an additional 120mm "satellite fan" for VGA or memory cooling. The cooler has a copper base, aluminum fins and six copper heatpipes. The fan speed is adjustable with the included VR fan control. 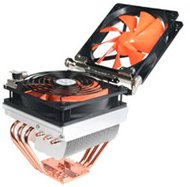 And then there's also the X5 Orb FX II which seems to have a lot in common with the BlueOrb FX. This HSF features a radian crotched fin design and features a fan with ThermalTake's FlashCool technology. This fan shows the ThermalTake logo, the temperature in Celsius and Fahrenheit and the fan's rotating speed.