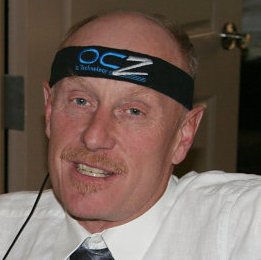 The guys from The Tech Report had a chat with OCZ at CES 2008 and tried out the Neural Impulse Actuator. This headband allows you to play computer games with your mind, in a game like Unreal Tournament 3 it can be used for basic movement and action controls like: forward, back, left, right, jump and shoot.

The concept behind the device is, in its way, relatively simple. The headband has a trio of sensors across the front, and those sensors read electrical impulses in various frequency ranges, which equate to a number of different facial movements and—so it would seem, at least—patterns of thought. Dr. Schuette said the original interface for the headband was a simple RS-232 serial connection, and the software reading the inputs was single-threaded. OCZ has now converted the hardware to a USB connection and has developed a new, multithreaded software layer that uses DirectX to process inputs. The difference, Schuette claimed, is substantial. The DirectX input mechanism is much quicker, and the software can use multicore CPUs to handle the mathematical tasks like fast Fourier transforms needed to interpret the signals from the headband's sensors.

He showed us the control panel for the device and walked us through the calibration process required for each individual wearer. The headband differentiates between a number of different actions, including the contraction of facial muscles (like jaw clenching and squinting), side to side eye movements, and alpha and beta brain wave fluctuations. OCZ's software shows a real-time readout for each variable tracked, and one can see the values fluctuate in apparently meaningful ways as the wearer talks, moves, or responds to me making fun of how he looks wearing that funny headband.

Check out the full article for more information on how the NIA works, it also features some photos of the software. The reporter was surprised by how the NIA works but says it's not perfect, even experienced users only manage to use the directional controls in a fairly rudimentary fashion. The biggest advantage seems to be that it quickly reads your reflexive responses, allowing you to shoot someone who just popped around a corner.

This controller looks very scifi but according to OCZ it should be available on the market in the next three to four months. The first version will be priced between $300 and $400.