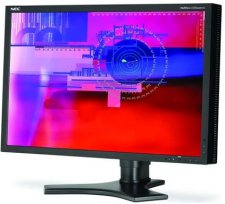 Curiously after these basics NEC's announcement descends into a curious game of show and tell. For starters, it has released no imagery so what you see above is the 'LCD2690WUXi' - it's little brother. Compounding things, NEC then goes into great detail about 'Overdrive' (which it uses to improve response times) and 'Eco-Mode' (which reduces the power consumption from screen brightness) and a whole host of other proprietary technologies such as 'X-Light Pro', 'ColorComp' and 'AmbiBright' (not to be confused with Philips' Ambilight), but nowhere does it actually declare the response times or brightness levels.