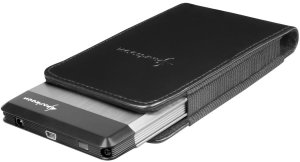 In order to offer customers the best possible protection against data thieves, Sharkoon is expanding its Swift-Case line up of external hard drive enclosures by adding a model with RFID access control. The Sharkoon Swift-Case Securita for 2.5" SATA hard drives comes equipped with RFID (Radio Frequency Identification) technology that protects against unauthorized access. Within the silver aluminium enclosure sits a RFID transceiver that responds solely to the accompanying RFID transponder. The transponder comes in a simple plastic fob design that attaches securely to key chains.

As a part of the initial setup, the RFID transceiver and transponder go through a coding process in order establish a unique encryption key. After the coding process, the hard drive can be locked or unlocked with a simple wave of the transponder in front of the sensor on the enclosure. In its locked state the hard drive is not recognized by computers or operating systems. The radio frequency itself is also protected by 128-bit AES encryption. Up to three different hard drives can be encrypted and protected by any one Swift-Case Securita, and then swapped in and out of the one enclosure. When unlocked, these additional hard drives can be used by directly connecting them to a computer or through a separate external housing; however, in their locked state access is not possible even when directly connected to a computer or through an external hard drive enclosure. A replacement transponder is also included and configured as a backup during the initial setup.

The Swift-Case Securita transfers data to computers via USB 2.0 and power is provided through an included USB Y cable that uses the power from a second USB port. Supported operating systems include Windows 2000/XP/Vista (32 bit), Mac OS 9.x/10.x and Linux from version 9.1. Included with the package users will find two RFID transponders, a USB Y cable (2x USB A / 1x mini-USB), screw driver, transport bag and an instruction manual.

Customers will find the Sharkoon Swift-Case Securita available from authorized retailers for the suggested retail price of 34 euros.