Posted on Sunday, Jan 20 2008 @ 04:05 CET by Thomas De Maesschalck
CoolerMaster is going to release the Centurion 590 case in March. This steel case weighs 8.5kg and is targeted at the mainstream market, according to VR Zone it will be sold for less than $85.

This case measures 120 x 440 x 510mm and is designed for ATX and micro ATX motherboards. There are nine 5.25" drive bays and one of these can be converted to an exposed 3.5" drive bay. The case features a removable module that supports four HDDs but it takes up three 5.25" drive bays.

You can mount upto six 120mm fans but unfortunately the case ships with only two fans: one 120mm blue LED front fan and a 120mm rear fan. Two more 120mm fans can be installed in the front to up the total amount of fans to eight but to do this you'll need to buy two 4-in-3 device modules and this will also prevent you from installing a DVD burner. 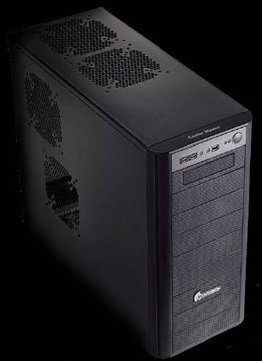 The case features tool-free installation for the HDDs, optical drives and add-on cards. The PSU is mounted in the bottom of the case and the rear features retaining holes for liquid cooling. The Centurion 590 has a fully meshed front for improved ventilation and has cable management holes to make cable routing easier.