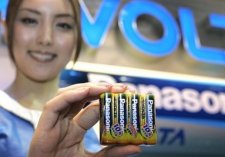 Panasonic announced it will start selling its Evolta AA batteries in April in Japan. These alkaline batteries will feature 20 percent more battery life than batteries from rivals such as Duracell and Energizer. Another advantage of the Evolta batteries is their 10-year shelf life, up to 60 percent longer than other batteries.

The new Evolta — whose name is derived from "evolution" and "voltage" — has proved its mettle against products from Duracell and Energizer, as well as its own upscale Oxyride batteries, according to Matsushita Electric Industrial Co., which makes Panasonic brand products.

Evolta's longer life results from more material being packed inside it, the new materials it's made with and its sturdier seal than predecessors had.

Guinness certified it in Tokyo Tuesday as "the longest-lasting AA alkaline battery cell," based on testing under guidelines set by the industry's International Electrotechnical Commission.

A pack of four will cost $5.40 in Japan, about 15% more than regular batteries. Prices outside Japan aren't set.