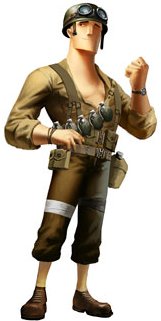 These days PC game makers have to get more original if they want to make money. NY Times writes Electronic Arts is experimenting with a new business model, they are developing a new Battlefield game that will be available on the Internet for free.

Battlefield Heroes will be released this Summer and will generate money through advertising and in-game items like clothing, weapons and other virtual gear that will be sold for a couple of dollars.

E.A.’s most recent experiment with free online games began two years ago in South Korea, the world’s most fervent gaming culture. In 2006, the company introduced a free version of its FIFA soccer game there, and Gerhard Florin, E.A.’s executive vice president for publishing in the Americas and Europe, said it has signed up more than five million Korean users and generates more than $1 million in monthly in-game sales.

Players can pay not only for decorative items like shoes and jerseys but also for boosts in their players’ speed, agility and accuracy. Mr. Florin said that while most users do not buy anything, a sizable minority ends up spending $15 to $20 a month.

With Battlefield Heroes, E.A. hopes to bring that basic system of “microtransactions” to Western players, along with increased advertising. Mr. Florin said the licensing agreements around the soccer game prevent E.A. from inserting in-game advertisements from companies that are not already sponsors of FIFA, the international soccer federation. By contrast, E.A. already owns the Battlefield franchise and will be free to insert whatever advertising it wants.