Far Cry 2 to be more realistic

"Don't expect mutants as some surprise later on," adds Far Cry 2 producer Lois-Pierre Pharand. Instead, your adventure through the African savannah could turn you into a mutant, feared and reviled by enemies and allies alike. That's thanks to Ubisoft's innovative approach to 'levelling up' your character. You begin the game infected with malaria, as do most characters in the lawless African state. As you progress you'll discover medicine that steadily 'cures' you, reinforcing your strength and giving you better resistance to attack and injury.

Ubisoft has created its own game engine called Dunia - which means 'World' in Swahili - for the development of Far Cry 2, and it'll be part of the developer's future next-gen projects. The Dunia engine is geared toward creating a credible environment, and a high level of immersion. "I want the player to feel the grime under his fingernails, the sweat, smell the gun oil" Hocking continues, "I wanted to create the guns jamming, the dust - the world isn't this clean, sterile, digital representation of Africa".

Another 'sim' effect that's generated plenty of interest already is the injury system. While you take damage as per usual, occasionally you'll be wounded so badly that you'll need to carry out some impromptu field surgery, digging the bullet out and patching yourself back up. Left untreated, wounds are always fatal - and if you're shot while taking care of the wound it's instant death.

Fortunately, Ubisoft hint that wounds will only crop up once every half hour or so, so the whole shebang will avoid becoming frustrating while retaining the visual impact. 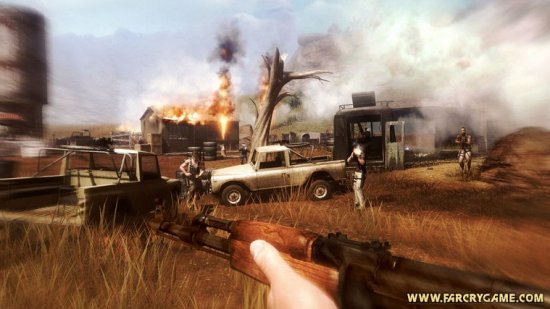