The SAPPHIRE HD 3870 ATOMIC version features an exciting new single slot cooler – the first in the world to feature Vapor-X – SAPPHIRE’s implementation of Vapour Chamber Technology (VCT). This advanced cooling solution provides more efficient and quieter cooling allowing the ATOMIC edition to ship overclocked out of the box, and to allow enthusiasts even more scope for performance tuning. The single slot design allows the use of multiple cards in the latest CrossFireX configurations even where PCI-Express slots are sited closely together.

SAPPHIRE HD3870 ATOMIC ships in an exclusive aluminium case, with an unrivalled bundle including CCL UV lamp, HDMI adapter and 3m HDMI cable, Black Box games bundle and a discount voucher ($30 in US, 20 Euros in Europe and £15 in UK) in addition to all the standard cables and software.

The SAPPHIRE HD 3870 ATOMIC has 512MB of high performance GDDR4 memory, clocked at 1200MHz (2.4GHz effective) and the GPU core is pre-overclocked at 825MHz. Supporting the new CrossFireX technology, two high speed connectors on each card allow 2, 3 or even 4 graphics cards to be daisy-chained together for enhanced performance when installed in a CrossFireX mainboard. 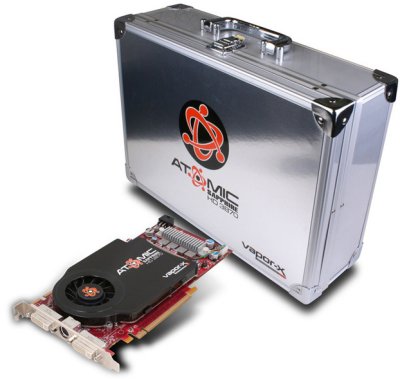 Looks quite impressive but you'll probably have to pay a big premium to get this version.