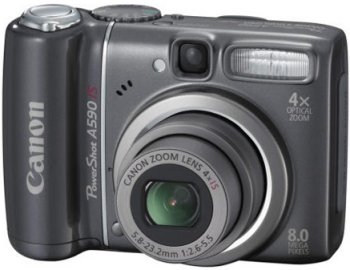 Canon has released three new entry-level digital cameras in its A-series: the PowerShot A590 IS, A580 and A470. They are priced between $129 and $179 and feature the usual new technologies like blur reduction and face detection.

Staking out the upper-middle tier of the PowerShot A-series, the new camera offers users the option of 19 shooting modes, from fully automatic to fully manual operation for greater creative control. The A590 IS camera also features Canon’s advanced Optical Image Stabilization (OIS). OIS significantly reduces the effects of camera shake (and the blurry pictures they cause) by actually allowing the lens to shift to compensate for camera movement or shake. Unlike electronic image stabilization systems that essentially mask the movement rather than actually compensating for it, Canon’s Optical “lens shift” system preserves the inherent quality of the stabilized image without covering up parts of the image. This OIS technology is even effective when the movement being stabilized is caused by extended telephoto or low-light shooting conditions.

PowerShot A470
The successor to last year’s successful entry level PowerShot A460 camera, the new 7.1 megapixel A470 model has undergone a striking external makeover, matched dramatically by a number of key internal enhancements and advancements. The immediate eye-impact created by the PowerShot A470 camera stems from its availability in four different color accents -- blue, red, orange and gray – over a contoured metallic finish body that highlights the camera’s new design and reflects the camera-user’s individuality, personality and taste.

This camera’s technological features compliment its expressive style. Ideal for first time camera-users, the PowerShot A470 camera features a 3.4X (38mm – 132mm equivalent) optical zoom lens that opens up at a responsive f/3.0 at wide-angle and f/5.8 at the telephoto settings. Despite its positioning as an entry-level camera with style, PowerShot A470 camera offers users the option of exploring their creative sides with manual overrides for ISO speed, exposure compensation and white balance, while enjoying the absolute ease of the automatic setting and taking advantage of the camera’s 14 shooting modes.