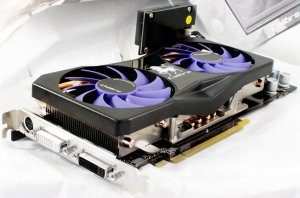 Sparkle has unveiled the Calibre P888+ - this graphics card is based on the GeForce 8800 GT and has a small LCD to show temperatures and other statistics.

With innovative mind in design, SPARKLE endows the Calibre P888+ Graphics Card with second generation of Graphics Display Port (GDP) daughter card- GDP2. With second generation of GDP, this daughter card use LCD with back light to show real-time GPU temperature, GPU working voltage, fan speed and Calibre Logo. User can manually switch the surveillance case with corresponding graphic logo to represent the case to avoid damage caused by GPU overheating or lower fan speed. Compared with SPARKLE's first generation GDP daughter card, GDP2 daughter card is added with the surveillances for GPU working voltage and fan speed, it's also added with smart surveillance functions. With a more beautiful LCD, user can be clear at a glance to know the working condition of the graphic card.