He we go again. Like an evil pope preparing to capture the Holy Land, Jeff Jones, Microsoft's self-proclaimed "Security Guy" (and Microsoft Director) just published the Vista One Year Vulnerability Report. As you can see from the graph above, JJ's methodology concludes that Microsoft's Vista easily bests the first year vulnerabilities found in XP, Red Hat Enterprise Linux, Ubuntu, and Apple's own OS X. 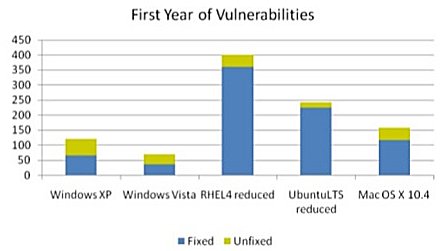