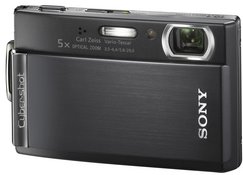 The new model incorporates Sony’s new intelligent scene recognition (iSCN), a technology that allows the camera to analyze shooting conditions and automatically select the optimal settings for the best photo results. In iSCN mode, the camera can automatically detect up to five scenes, and choose the best setting for the situation.

More Intelligent Features
The camera’s updated face detection technology can differentiate between the faces of children and adults. Simply select “child priority” or “adult priority,” and the camera will automatically detect up to eight faces in the camera frame, adjusting focus, exposure, white balance and flash for the subjects that matter most.

Lubell said Sony has applied a similar advancement to its “smile shutter” technology, an intelligent camera function that captures smiles automatically by searching for facial movements related to smiles and laughs. Capable of detecting multiple smiles instead of only one, users can apply “child priority” or “adult priority” in smile shutter mode to capture photos only when the intended subjects smile.

New controls on this model include: semi-manual focus, which lets the user set the focus range; improved auto focusing system to cover macro ranges in auto mode; and the addition of Sony’s D-Range Optimizer Plus mode that uses a higher image correction algorithm to retrieve more picture detail in bright highlights and dark shadows caused by high-contrast shooting.