Posted on Friday, Feb 08 2008 @ 16:08 CET by Thomas De Maesschalck
Nexus released two new processor coolers: the aluminum XiR-2300 and the copper XiR-3500. Both coolers feature a copper base with four 6mm copper heatpipes and a small aluminum heatsink. The XiR-2300 features aluminum fins and the XiR-3500 has pure copper fins.

The Nexus XiR coolers combine some of the most advanced technologies in the market used for CPU coolers. Heat pipes, SkiveTek and ultra-thin fins combined with a real silent temperature controlled fan delivers ultimate performance which has never been this quiet before.

XiR coolers are crafted out of the purest aluminum and copper materials. The heat sink covering the heat pipes and the copper base is made using SkiveTek technology. We have managed to apply the best technologies at the best position on the cooler. And the result is astonishing...

The temperature sensor on the fan makes sure the fan speed is always at an optimal lowest speed. The speed can vary between 1500 and 2500 PRM creating a noise-output of an inaudible 15 dB(A) up till a still truly quiet 24 dB(A). 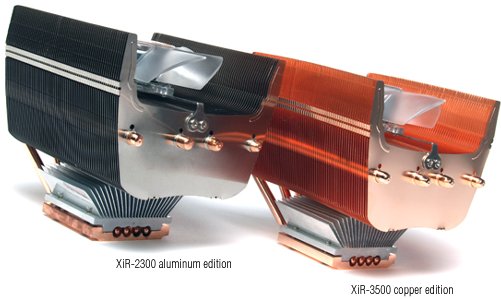