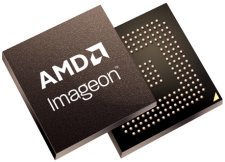 AMD has enhanced its established line of innovative, open-standard handheld device technologies with upcoming AMD Imageon™ processors, as well as next-generation 3D and vector graphics cores available for licensing. These new AMD offerings are designed to allow device manufacturers and network operators to support today’s most popular applications, as well as cutting-edge applications that will thrill tomorrow’s mobile consumer.

According to analyst firm iSuppli, premium mobile content such as music, games and video is gaining momentum as a key revenue driver for network operators. In fact, mobile content now surpasses messaging as the largest data segment, representing 51 percent of total data revenue.

“In many mobile phone markets worldwide, voice and messaging services are beyond the point of saturation,” said Pam Tufegdzic, analyst, iSuppli Corporation. “To continue to grow their subscriber base and increase return on their investments, network operators no longer see premium mobile content as a value-added competitive advantage, but rather as a mainstream service necessary for market entry.” As a leading supplier of media processors and graphics cores for the handheld market, AMD works with an ecosystem of device makers, software developers and baseband suppliers to deliver innovative technology solutions that can yield truly immersive mobile content.

The latest technology offerings to broaden the popular family of AMD Imageon processors will include: Graphics To Go AMD is committed to delivering stunning graphics to consumers everywhere by licensing intellectual property (IP) to mobile chipset suppliers. AMD announced several IP deals during the past year as part of this business. Building on that success, unique next-generation AMD graphics cores are available to leverage the same innovative AMD technology that provides an immersive graphics platform from PCs to game consoles such as the Microsoft® Xbox 360™ video game and entertainment system. New AMD handheld technology will be available for OEMs and silicon supplier licensees to sample beginning this month. Features enabled by these new products and technologies are expected to start appearing in mobile devices in late 2008 and 2009.