Posted on Monday, Feb 18 2008 @ 04:15 CET by Thomas De Maesschalck
Scientists dugg up a fossil of a bizarre dinosaur that roamed Africa's Sahara desert some 110 million years ago.

Eocarcharia dinops, or ''fierce-eyed dawn shark,'' was armed with three-inch (7.6-centimeter), blade-like teeth, likely for disabling and dismembering prey. Some experts speculate that its menacing brow was used in head-butting contests with rival males.

"From the texture of the [skull] bone, it seems like they almost have a bill on the front of their face for sticking their head in and gnawing away at carcasses," said Paul Sereno. The University of Chicago paleontologist co-authored the new study on the species, which appears in the latest issue of the journal Acta Palaeontologica Polonica. 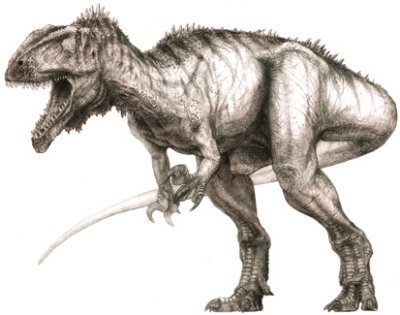