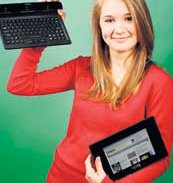 Times Online writes about the upcoming One notebook from Elonex which will cost only £99:

A new laptop computer for just £99 sounds like the kind of offer found in a spam e-mail or on a dodgy auction website. But the British company Elonex is launching the country’s first sub £100 computer later this month and hopes to be making 200,000 of them by the summer. It will be aimed at schoolchildren and teenagers, and looks set to throw the market for budget laptops wide open.

Called the One, it can be used as a traditional notebook computer or, with the screen detached from the keyboard, as a portable “tablet” – albeit without the planned touchscreen that Elonex had to abandon to hit its £99 price tag. Wi-fi technology lets users access the internet or swap music (and homework) files between computers wirelessly.

Personal files can be stored on the laptop’s 1GB of built-in memory or on a tough digital wristband (1-8GB, from £10) that children can plug into the USB socket of whichever computer they happen to be using, be it the One, a PC at school or their parents’ laptop.

So how can Elonex make a computer for so little? After all, UK consumers paid an average of £477 for a new laptop in 2007, according to the retail analyst GfK.

The secret is simple: open-source software. The One runs on Linux, which is a rival to Windows but completely free to use. Open-source software can be freely swapped or modified by anyone who wants it. In the past such operating systems (there are several of them) have been outgunned by the more sophisticated Windows programs. However, an open-source operating system is ideal for low-cost devices as it performs well on less powerful, cheaper hardware.