In a live demo at the press conference we got to see the EPOC go through its paces. An operator on stage wearing the headset was able to manipulate the visual image of a 3D avatar. Just by thinking about it, the person with the headset was able to make the 3D robot avatar smile, frown, wink, and project more emotions. In yet another demo the operator used the headset and just by thinking about it and made the head move via a built in gyroscope. In another demo, the operator made a 3D cube rotate, zoom in and out of the camera and more. In terms of games it was suggested during the press conference that instead of hitting a button a person with the headset could simply think about, say, performing a spell or doing some other in-game action. According to the company's claims, the battery life for the device will last about 12 hours.

Demiurge Studios has created a game made especially for the EPOC that will allow people to use the device to, say, raise a rock in the air with just your thoughts while wearing the headset. The device will ship with what they are calling the EmoKey which will allow all PC games to use the headset. In addition a SDK will be released that will be an open standard that will give any developer a way to put support for the EPOC in their game. 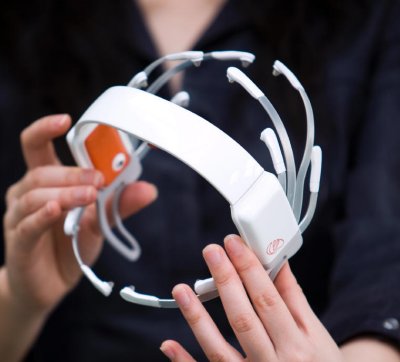 This product looks very similar to OCZ's Actuator. Emotiv says their EPOC headset should be available by the end of this year for $299.