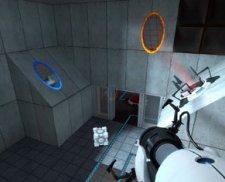 Valve confirmed they're working on a Portal sequel:

Valve's acclaimed puzzle-action hybrid Portal will be given a sequel, according to the game's lead designer Kimberly Swift.

"Well, I believe Doug Lombardi who is our lead marketing director at Valve, has announced Portal 2," said Swift in an interview with G4TV.

Lombardi had previously stated that more Portal was on the way, but Swift's comment is the first mention of a true sequel to be made thus far.

No further details on the project were provided.