Experiment: Putting a PC on fire

Posted on Saturday, February 23 2008 @ 13:00 CET by Thomas De Maesschalck
Just for the fun of it German computer site PC Games Hardware teamed up with their local fire brigade to bring you some exclusive pictures of a burning PC.

In a quickpoll we've asked you to tell us, what kind of experiment you'd like to see in our next episode of "Dangerous Experiments". More than a third of all votes were cast on the issue of a burning PC. We've - as always - felt obliged to do this and put fire on a PC up and running.

The most curios results of this experiment (i.e. despite heavy flames lurking out of the case, the pc still runs windows) we've captured on HD-Video. The full version (ten minutes!) is on our magazine's cover mount DVD for the 04/2008 issue but we've decided to already give you a glimpse of what's to come. 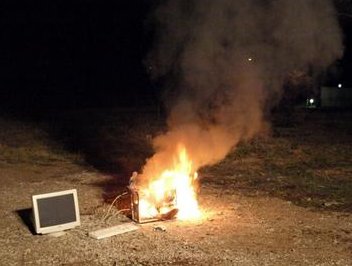