Posted on Sunday, Feb 24 2008 @ 08:21 CET by Thomas De Maesschalck
A report from DisplaySearch claims LCD TV shipments surpassed CRT shipments for the first time in the fourth quarter of 2007.

* Share gains in all regions—LCD unit share improved in every region worldwide, including Europe, which had the strongest growth of the quarter. LCD penetration was highest in developed regions, reaching 86% in Japan, 84% in Western Europe and 78% in North America. But the strongest unit growth for LCD was in developing regions, such as Latin America, Asia Pacific, and Middle East & Africa, which combined rose 106% Y/Y, where penetration is low and the opportunity is substantial.

* Natural replacement for CRT—LCD is the only other technology that extends down in screen size to less than 20”, which makes it a natural replacement to CRT TVs, as consumers upgrade and CRT TV tube capacity shrinks. Current plasma (PDP) TV technology extends down to 32”, but the CRT market is largely below this size, and many regions of the world have limited acceptance of 40”+ screen sizes. As shown in Figure 1, CRT has fallen from 77% of global TV shipments in Q1’06 to 46% in Q4’07, even with LCD prices at a 224% ASP premium for 32” and smaller screen sizes.

Share gains against RPTV and PDP at 40”+—Despite the natural replacement of the CRT TV market, LCD has also made strong share gains against plasma and RPTV technologies with new larger LCD panel fabs optimized to produce larger screen sizes more cost effectively. LCD share of 40”+ TV’s has grown from 44% to 65% Y/Y on a unit basis while PDP TV has fallen from 40% to 31% and RPTV is down from 16% to 3%. 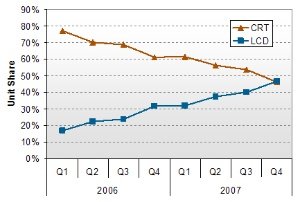