Posted on Monday, Feb 25 2008 @ 19:09 CET by Thomas De Maesschalck
Sun has leaked some information on its website about Intel's upcoming 6-core Dunnington Xeon and also about the Nehalem processors.

Dunnington will be a new 45nm processor in the Penryn family, it will feature three dual-core banks and have 16MB of shared L3 cache memory. Each pair of cores can also access 3MB of local L2 cache. The six-core Dunnington processors will be available in the second half of this year and will be pin-compatible with Intel Tigerton processors, this means they'll work in existing Clarksboro chipset based motherboards.

The leaked slide deck also includes more information about Intel's Penryn successor, codenamed Nehalem. Nehalem is everything Penryn is -- 45nm, SSE4, quad-core -- and then some. For starters, Intel will abandon the front-side bus model in favor of QuickPath Interconnect; a serial bus similar to HyperTransport.

As noted by ZDNet blogger George Ou, the slides contain some rudimentry benchmarks for Nehalem and other publicly available processors. From this slide deck, Ou estimates Nehalem's SPEC*fp_rate_base2006 at 163 and the SPEC*int_rate_base2006 at 176. By contrast, Intel's fastest Harpertown Xeon X5482 pulls a measly 80 and 122 SPEC fp and int rate_base2006.

The Nehalem processor more than doubles the floating point performance of its current Penryn-family processors. Ou adds, "We’ll most likely know by the end of this year what the actual scores are, but I doubt they will be more than 5% to 10% off from these estimated projections."

It's important to note that these estimates are not actual benchmarks. Intel's document states, "Projections based on *SPECcpu2006 using dual socket Intel Xeon 5160 Processor performance as the baseline." As discussed on DailyTech before, simulated benchmarks offer little substance in favor of the real deal. 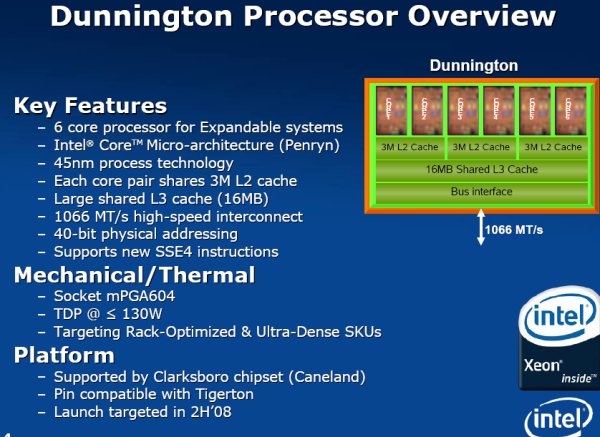 Here's a slide with side-by-side projections of the performance of Intel Xeon and AMD Opteron processors: 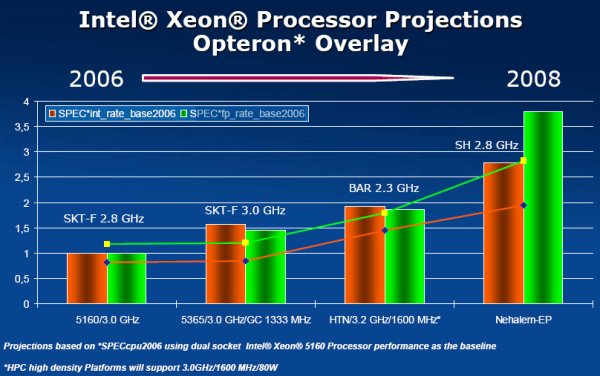 And a slide with estimates of the floating point and integer performance: