Posted on Sunday, Mar 02 2008 @ 00:00 CET by Thomas De Maesschalck
In addition to the first Dark Power Pro “First Class” Launch end of December 2007, power supply maker be quiet! is introducing four new modular high-end versions at CeBIT. They are designed for gamers and technical enthusiasts and will come out as 750 Watt, 850 Watt, 1000 Watt and 1200 Watt edition in April 2008.

For setting up interactive entertainment-systems with three graphic cards the high wattage versions 1000 Watt and 1200 Watt will be delivered with six 6+2 pin PCIe connectors.

With a total up to 25 cable sets, 22 will be removable; they will offer the highest possible compatibility with all mainboards and graphic cards.

To guarantee a high stability of the new high-end systems the modular power supplies are offering six separate 12V circuits for connectable components. In matters of green-IT and concerned to existing energy saving programs all new models are coming out with high efficiency rate of 88%

The included ECASO thermal technology preserves and protects components and controls the speed of the PSU fan and up to a maximum of 4 additional case fans, according to the temperature. The FDB fan technology and 120 mm power supply fan of all models is supporting a very silent operation. The warmth-depending air velocity control also includes a new gear-up impulse to ensure that each kind of connected case fans will start due to a higher level of voltage in the beginning.

A special feature of the new Dark Power Pro models is a non-interchangeable, intelligent connection concept. There is a special colour coding system on the power supply connections and also on one side of the modular power cables that prevents any mix-up of the cable directions. For a tidier PC, an all-in-one cable is supplied, enabling two Molex, two SATA connectors and a floppy drive to be grouped together in a single bundle. 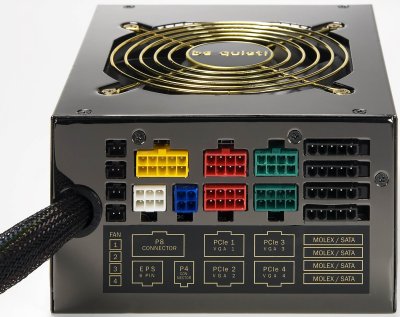