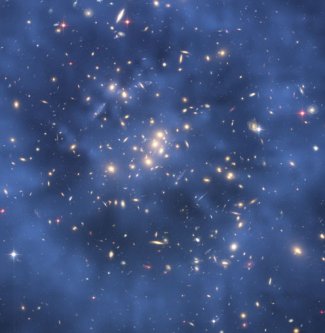 Because the dark matter, by definition, is invisible to telescopes, the only way to detect it on such grand scales is by surveying huge numbers of distant galaxies and working out how their images, as seen from telescopes, are being weakly tweaked and distorted by any dark matter structures in intervening space.

"We measured the shapes of millions of galaxies and then mapped the stretching of their light," explained astronomer Ludovic Van Waerbeke of the University of British Columbia. The international team from France and Canada studied the galaxies with the Canada-French-Hawaii Telescope Survey's MegaCam telescope in Hawaii.

The resulting map of distorted galaxies reveals the locations of the vast dark matter structures, with more dark matter located where the greatest distortions are seen, he explained. A paper describing the discovery by Van Waerbeke and his colleagues appears in the latest issue of Astronomy and Astrophysics.

The dark matter of the giant structures can distort the appearance of distant galaxies because dark matter has gravity, which can alter the course of light--or "lense" it--as it flies through space. So although the galaxies themselves are not affected, their images are distorted as seen from Earth when their light passes near significant concentrations of dark matter. The distortion is very small, on the order of 0.1 percent.