Posted on Monday, Mar 03 2008 @ 00:21 CET by Thomas De Maesschalck
Next week MSI will release a bunch of new notebooks at CeBIT.

MSI’s Gaming Series Notebook Computers has always been a top selection for gamers. After the explosion created by the newly added Turbo Drive Engine Technology in speed function in the world’s first Super-Band Computer, we are leading another new wave with the exclusive Turbo Battery Technology, equipped in the GX600-08 model which will be introduced at CeBit.

The PR400 Crystal Collection that is about to be introduced is designed for the office workers that are mild in temperament but has the great taste for beauty and elegance, whom are more inclined of selecting a product that is both professional as well as fashionable. Office worker would usually use notebook computers that are black or silver in color to demonstrate their professionalism, but it loses the unique taste of the individual. There are those out there that would like to show a bit of individualism in taste and fashion within the compound of staying business minded, without being overly extravagant but still being about to present the idea of self. For this particular selected group, the PR400 is just within their reach. All you need is a little extra money for the opportunity of displaying fine taste and individuality at the workplace.

MSI’s P series is designed especially for our business consumers; there is even a model that is only 12 inches in size which is also light, thin, as well as portable, which is the perfect partner for our modern business people that are often on the run. MSI is also ready to introduce the new model PX210 with its very own ATI Discrete GPU, so even our 12 inch users can have a complete visual experience.

The brand new PX210 will be the very first of the 12 inch models to have its own Discrete GPU, comparing it to the UMA Card usually used by 12 inch computers, having an ATI Discrete GPU is not only applicable to the new Vista software, it is also better at supporting 3 dimensional graphics common for gaming. It doesn’t have the lag problem that the UMA Card encounters, so the users may have a fluid and comfortable picture.

MSI’s E Series focuses in the gaming aspect of notebook computers. It stresses in developing the best possible environment and variety with all digital medias, also the first in the world to receive the recognition by Dolby in home surround sound. It is also equipped with high resolution web-cam, astonishing high definition graphic display, and digital television as well as other technologies. Providing the highest quality in all aspect of entertainment.

In order to offer our consumers a larger selection of sizes, MSI has developed a brand new 13 inch model along with the existing 15 and 17 inch models in the E-Series. Emerging with the trend of the high definition era, MSI’s E Series will be equipped with HD DVD capability, so our users may enjoy the very best in digital content. 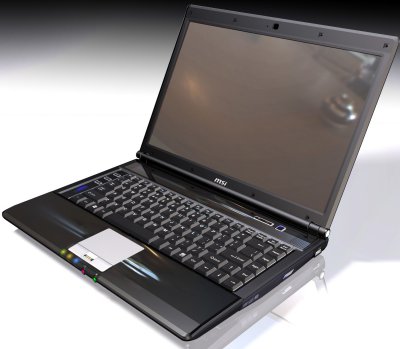