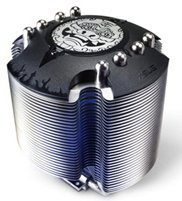 Unique Design – The Legend of the Sword Lion
The ASUS Lion Square is named after the legend of the Sword Lion, which is the emblem of strength, courage and good fortune. The bold and unique design features 8 heat pipes that originate from the bottom of the device for heat conduction and adds aesthetic appeal with nuts on the top of the cooler cover that mimic the shape of the shield. Both technically and artistically, the Lion Square perfectly matches the spirit of the traditional sword lion, in the hope of providing the gamers an effective and safer operating experience, or even good fortune!

About the legend:
A famous general once led his armies to defeat a group of strong enemies after an invasion. The shields that were equipped by the armies were carved with a lion-tattoo and the swords were placed through lion's mouth. Later generations believe that this lion-tattoo symbolizes Strength, Courage, and Good Fortune.

Innovative Features for Convenience and Quiet Cooling
The Lion Square incorporates several innovative features that include: a PWM function with the 9cm fan that automatically modulates fan speeds according to the CPU temperature – delivering quiet cooling at a mere 16dBA; while innovative assembly with specially designed spring screw and clips makes fastening easier than ever before. In just 2 simple steps, the Lion Square can be easily installed without removing the motherboard from the system.