Saturn moon may have rings 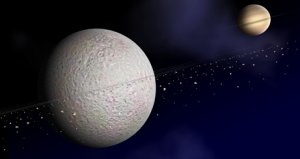 Astronomers claim Rhea, Saturn's second largest moon, may be the first known moon with its own small system of rings.

Although no one has actually seen Rhea's rings, scientists say that odd data collected during a 2005 flyby of the Cassini spacecraft provides strong clues.

"But the data we have are a real puzzle, and the only reasonable explanation we've been able to come up with is the debris disk proposal."

Jones, of University College London, led a study on the Cassini data to be published in tomorrow's issue of the journal Science.

Rhea sweeps through Saturn's magnetic field, which traps charged particles in a bubble zone that includes the tiny moon's orbit.

Jones' team had expected to see a dip in the amount of electrons in Rhea's wake as the surface of the 950-mile-wide (1,529-kilometer-wide) moon intercepted the particles.

The researchers also expected Cassini to find a thin halo of dust kicked up by the micrometeorites that constantly bombard Rhea's surface.

The team did detect these features, but they also found a surprise: The amount of charged particles decreased along a region extending outward on each side to about eight times the moon's diameter.