Intel NAND Products Group's managed Troy Winslow announced we can expect a new lineup of solid state disk products from Intel in the second quarter of this year.

The chip giant is planning to release 1.8" and 2.5" SSDs with 80GB and 160GB capacities and a Serial ATA interface. Intel is planning to compete directly against Samsung, SanDisk and Toshiba and claims its solid state disks will be faster than those from its rivals. Samsung currently has a SSD with a 100MB/s read speed but Winslow claims Intel's drives will be much better than that.

The pricing of Intel's SSD products is unknown but according to Winslow NAND flash memory prices will drop 40 percent this year and in 2009 and 2010 we can even expect price drops of 50 percent. 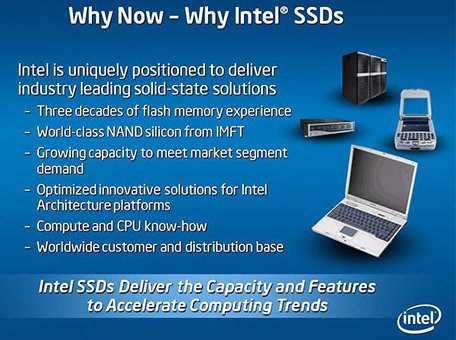