Posted on Friday, Mar 14 2008 @ 14:33 CET by Thomas De Maesschalck
ThermalTake released a new Orb cooler - the GunMet Orb. This processor cooler is designed for Intel LGA775 and AMD AM2/AM2+/K8 processors and is made out of aluminum. It has 140 fins and features a white LED fan with a max airflow of 77.85 CFM.

The radial dissipation design of this new GunMet Orb is unique in the cooling industry. The number of cooling fins multiplies as they extend from the center of GunMet Orb to reduce backpressure on the fan and to achieve faster heat dissipation. The 4-croched fin (y-split fin) design can further allow GunMet Orb to maximize its cooling fins up to 140 fins at the end to provide extended cooling surface and smooth airflow.

GunMet Orb uses a 120mm ultra-silent fan outputting only 17dBA to provide the most enjoyable and silent working environment even while your system loaded at full performance. It includes a built-in “White” LED clear fan creating a new fashionable style with the surrounding gunmetal colored fins. 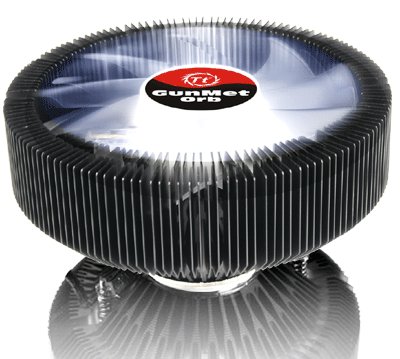