Posted on Thursday, Mar 20 2008 @ 02:00 CET by Thomas De Maesschalck
Asus has released a new motherboard in its ROG series - the Striker II Extreme. This motherboard is based on NVIDIA's new nForce 790i Ultra SLI chipset.

Fusion Block System for 50% Cooler Thermal Performance
The Fusion Block System utilizes a Pin-Fin heatsink design that combines the ROG´s renowned heatpipe design with the additional ability to connect to a water cooling system. By taking the entire integrated solution into design considerations, the user can enjoy 50% cooler thermal performance to the north bridge, south bridge, and even VRM with a single connection – providing them with a versatile, efficient, and advanced thermal system for better overclocking results.

Instant CPU Boosts with CPU Level Up
Catering to avid overclocking enthusiasts and gamers alike, the ROG Striker II Extreme Series comes with two unique features for flexible CPU upgrading without extra costs. The CPU Level Up* feature makes it simple for users to upgrade CPU performances without prior overclocking knowledge. All that is required is for the user to pick the processor speed they want, and the motherboard will do the rest. Instant performance upgrades have never been easier! Overclocking enthusiasts can also make use of the CPU Level Up result to adjust settings for even higher frequencies. The other feature, Extreme Tweaker, is a one stop shop to fine-tune systems for optimal performance. With a vast array of options to tweak frequencies, over-voltage or memory timing settings, this handy application will allow overclocking gurus to fully fine-tune their system to their desired settings for maximum overclocking and performance outputs. * Please check the official ROG website at http://rog.asus.com.tw for a complete CPU support List for this function

Protect Your Devices with Voltiminder LED and COP EX
In order to pursue the highest level of performance, overvoltage adjustment is crucial. However, this practice is risky and can lead to damage to expensive PC components. Acting as the "red zone" of a tachometer, the ROG exclusive Voltiminder LED displays the voltage status for the CPU, NB, SB, and Memory in an intuitive color-coded fashion. This allows quick voltage monitoring that is essential while overclocking. The COP EX feature allows users to overclock with confidence and increase chipset voltages without the worries of overheating. Used to monitor the chipsets, it can actually save an overheating GPU. With the Voltiminder LED and the COP EX as protection mechanisms, more overclocking freedom and maximum performance can be achieved. 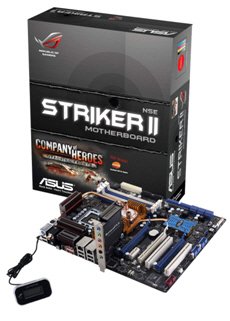