Posted on Thursday, Mar 20 2008 @ 19:35 CET by Thomas De Maesschalck
Some photos of Intel's official Bloomfield motherboard were posted on the web today.

The board pictured below is an early reference sample codenamed Bloomfield. Bloomfield will be released in Q4 together with the Nehalem server parts and it will be a triple-channel DDR3 high-end workstation/gaming platform. The Bloomfield motherboard has single 1366-pin CPU socket, four DDR3-1333 slots, three of which being colored blue to signal the triple-channel support and two PCI-Express 2.0 x16 slots, likely bringing CrossFire to Intel's platform. The only heatsink installed is the one covering the ICH10 southbridge while the Tylersburg NB is left "naked". The board has no IDE or floppy connectors, but only six SATA 3.0 Gbps ports. 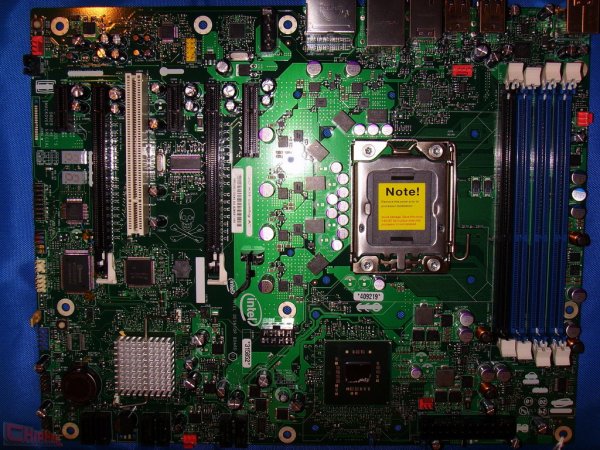