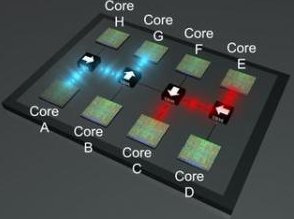 DailyTech reports IBM made a new breakthrough in its quest to achieve optical computer by creating world's smallest nanophotonic switch:

The tiny silicon device, measuring a mere hundredth of the size of a human hair, is an essential step towards creating "light transistors," that allow chips to process at the speed of light. Such chips could greatly outclass today's chips in performance and speed, as today's chips rely on slower electrical communication through copper wires.

Before such chips, though, an important stepping stone IBM sees is the use of its optical technologies in on chip networks. The optical devices could be put to use as a bus between cores in IBM's next generation Cell processors or other multicore systems. Yurii Vlasov, manager of silicon nanophotonics at IBM’s TJ Watson Research Center states, "This new development is a critical addition in the quest to build an on-chip optical network."

IBM's partially DARPA-funded research is published in the April 2008 journal Nature Photonics, titled "High-throughput silicon nanophotonic wavelength-insensitive switch for on-chip optical networks." The switch takes light converted by IBM's other devices from electrical signals and can direct it along multiple routes. This will eventually allow on-chip optical interconnects. IBM states that the device fulfills several key criteria making it ideal for use on-chip. First, they state, it is extremely compact. Secondly, it can process multiple wavelengths of light (known as colors in the visible spectra). This means that with each wavelength transmitting data at up to 40 Gb/s, the aggregated bandwidth can exceed 1 Tb/s.