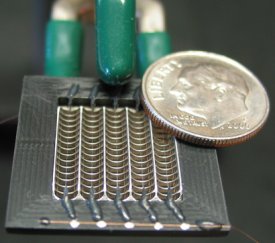 A pair of engineers from Thorrn Micro Technologies have created a new solid state fan that puts traditional air coolers to shame. The device works similarly to household air purifiers and can move more air than fans that are 35 times its size.

The resulting fan is the most powerful and energy efficient fan of its size and moves more air than fans that are 35 times its size. The RSD5 solid-state fan is described by Singhal as, “One of the most significant advancements in electronics cooling since heat pipes. It could change the cooling paradigm for mobile electronics.”

The device operates thanks to a phenomenon called corona wind. This corona wind is created by placing a series of live wires within uncharged conducting plates contoured into half cylinders, partially enveloping the wires. The live wires generate micro-scale plasma that conducts electricity.

The corona wind is created within the intense electrical field that results from the configuration of the wires and the conducting plates. The researchers say they were able to control the micro-scale discharge to produce maximum airflow without risk of arcing or sparks which could prove catastrophic to electronic devices.

Schlitz says, “The technology has the power to cool a 25-watt chip with a device smaller than 1 cubic-cm and can someday be integrated into silicon to make self-cooling chips.”