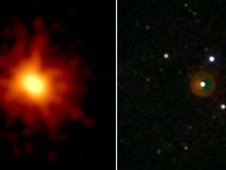 The explosion was a gamma ray burst. Most gamma ray bursts occur when massive stars run out of nuclear fuel. Their cores collapse to form black holes or neutron stars, releasing an intense burst of high-energy gamma rays and ejecting particle jets that rip through space at nearly the speed of light like turbocharged cosmic blowtorches. When the jets plow into surrounding interstellar clouds, they heat the gas, often generating bright afterglows. Gamma ray bursts are the most luminous explosions in the universe since the big bang.

Swift's Burst Alert Telescope picked up the burst at 2:12 a.m. EDT, March 19, and pinpointed the coordinates in the constellation Boötes. Telescopes in space and on the ground quickly moved to observe the afterglow. The burst is named GRB 080319B, because it was the second gamma ray burst detected that day.

Swift's other two instruments, the X-ray Telescope and the Ultraviolet/Optical Telescope, also observed brilliant afterglows. Several ground-based telescopes saw the afterglow brighten to visual magnitudes between 5 and 6 in the logarithmic magnitude scale used by astronomers. The brighter an object is, the lower its magnitude number. From a dark location in the countryside, people with normal vision can see stars slightly fainter than magnitude 6. That means the afterglow would have been dim, but visible to the naked eye.

Telescope in Chile and the Hobby-Eberly Telescope in Texas measured the burst's redshift at 0.94. A redshift is a measure of the distance to an object. A redshift of 0.94 translates into a distance of 7.5 billion light years, meaning the explosion took place 7.5 billion years ago, a time when the universe was less than half its current age and Earth had yet to form. This is more than halfway across the visible universe.

"No other known object or type of explosion could be seen by the naked eye at such an immense distance," said Swift science team member Stephen Holland of Goddard. "If someone just happened to be looking at the right place at the right time, they saw the most distant object ever seen by human eyes without optical aid."

GRB 080319B's optical afterglow was 2.5 million times more luminous than the most luminous supernova ever recorded, making it the most intrinsically bright object ever observed by humans in the universe. The most distant previous object that could have been seen by the naked eye is the nearby galaxy M33, a relatively short 2.9 million light-years from Earth.

Analysis of GRB 080319B is just getting underway, so astronomers don't know why this burst and its afterglow were so bright. One possibility is the burst was more energetic than others, perhaps because of the mass, spin, or magnetic field of the progenitor star or its jet. Or perhaps it concentrated its energy in a narrow jet that was aimed directly at Earth.