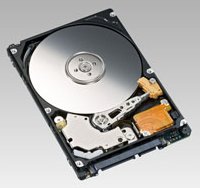 Fujitsu has unveiled a 2.5" MHZ2 BJ series hard drive with a capacity of 320GB and a rotational speed of 7200RPM.

The MHZ2 BJ series requires only 2.3 W of power for read and write operations, ranking it among the most power-efficient drives in its class. The series is one of many new products announced as part of Fujitsu's Green Policy Innovation initiative, unveiled in December 2007 to promote energy-efficient products and services as a way to help customers lower their ecological footprint.

As PCs offer an increasing number of sophisticated functions, there is an increasing need for high-capacity hard disk drives with improved processing capabilities.

But with growing worldwide concern over global warming and other environmental problems, there is also a demand for hard disk drives that consume less electricity.

Fujitsu has responded to these needs with hard disk drives that feature a rotational speed of 7200 RPM and capacities up to 320 GB, double the capacity of previous models. In addition, the series also supports the Serial ATA 3.0 Gb/s interface, which has been rapidly adopted throughout the industry, for high-speed data transfers.

These hard drives will be available by the end of June 2008.