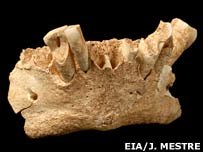 Scientists dug up the oldest human fossil yet found in Western Europe. A jawbone and teeth dated between 1.1 and 1.2 million years old and some stone tools and animal bones were found at the Atapuerca site in northern Spain.

The finds provide further evidence for the great antiquity of human occupation on the continent, the researchers write in the journal Nature.

The discovery comprises part of a human's lower jawbone. The remains of seven teeth were found still in place; an isolated tooth, belonging to the same individual, was also unearthed.

Its small size suggests it could have belonged to a female.

The find was made in the Sierra de Atapuerca, a region of gently rolling hills near the Spanish city of Burgos which contain a complex of ancient limestone caves.