The ordinary GeForce 9600 GT Graphics Cards on market may have a daunting thermal performance puzzle due to the insufficient wind pressure and airflow from the reference cooling fans. Now with strong R&D teams, SPARKLE addresses the issue by specially introducing Dual Fly Cooling System for the Calibre P960 Graphics Card to replace NVIDIA reference cooling fans which only have ordinary cooling effect.

This Cooling System developed by SPARKLE itself can get the most heat exchange area in a limited space, guarantee a highly efficient cooling effect. Besides, the cooling fans of the Dual Fly Cooling System can be adjusted aslant, so not only MOS circuit on the PCB can be cooled efficiently, the whole cooling efficiency can be raised too. According to the cooling test data provided by SPARKLE, when tilting the two cooling fans of the Dual Fly Cooling System 15 degrees, the GPU and video memory working temperatures can be 10 and 1.87 centigrade degrees lower than the reference cooling fans.

The chassis environmental temperature also dropped by 4.66 centigrade degrees. At the same time, compared with the 30.6dB working noise brought by the reference cooling fans the Dual Fly Cooling System exclusively provided by SPARKLE has obvious advantage, its working noise only reaches 29dB. 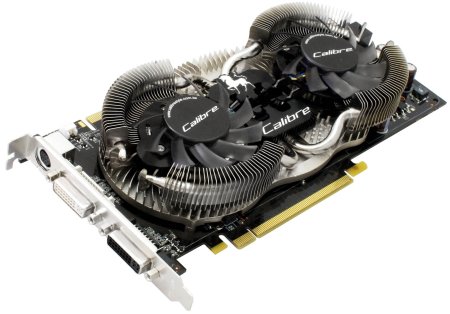