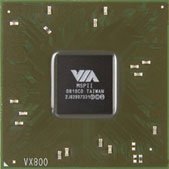 VIA released the VX800 series of IGP chipsets. These chips are designed for ultra mobile devices and embedded markets and feature a north + south bridge with an integrated VIA Chrome9 graphics core that supports DirectX 9 graphics.

The VIA VX800 Series comprises two primary digital media IGP chipsets, the VIA VX800 for ultra thin and light notebooks, mini PCs and embedded devices, and the ultra low voltage VIA VX800U for the fast-expanding ultra mobile market, including the rapidly-emerging mini-note, UMPC and UMD markets.

Strategic to the continued success of the VIA Ultra Mobile Platform based on the VIA C7®-M ULV processor, the VIA VX800U looks set to further boost VIA’s leadership in ultra mobile platforms, packing a host of features into an even more power efficient package with a maximum power draw of only 3.5 watts.

Fully Microsoft Windows Vista™ compliant, the VIA VX800 Series supports both current VIA C7, VIA C7-M and VIA Eden processors and also upcoming processors based on the VIA Isaiah Architecture, ensuring vendors can offer a wider range of performance and price points utilizing the same platform infrastructure.

“The explosive growth of the Mini-Note category and the emerging Ultra Mobile Device category has clearly demonstrated the increased importance on low power, high performance, and small footprint,” and said Richard Brown, Vice President of Corporate Marketing, VIA Technologies, Inc. “The VIA VX800 Series goes a long way towards maintaining VIA’s leadership in the ultra mobile and other key market segments, and allows our customers to bring products with enhanced features and performance to market faster.”

The VIA VX800 Series integrates all the cutting-edge features of a modern chipset's North and South bridges into a single chip package measuring just 33mm x 33mm, generating a silicon real estate saving of over 42% over traditional twin-chip core logic implementations.

The series comprises two skus; the VIA VX800 is targeted at mini green PCs, full featured and thin ’n’ light notebooks, and high performance embedded systems, with a maximum power consumption (TDP max) of 5 watts, while the ultra low voltage VX800U has been designed for the exciting ultra mobile device market, and boasts a maximum power draw of a miserly 3.5 watts. By strictly adhering to VIA’s stringent power efficiency design parameters, complete processor platform power draw can be limited to as low as 7.5 watts.

Key features of the VIA VX800 Series Special features for the consumer electronics and embedded markets include support for the low power device interfaces of SDIO, UART and SPI, as well as for the popular memory card interfaces of SD, MMC and MS.

The VIA VX800 Series chipsets will start shipping in April 2008; for more information and full specifications, please visit the VIA website at: