WiMAX is a standards-based wireless broadband technology that delivers an open Internet experience similar to that of fixed broadband technologies with typical data download speeds of up to 2-4 Mbps per user with peak download speeds of up to 10 Mbps. Unlike current single point local area technologies like Wi-Fi which have a range of a few hundred feet, WiMAX networks consist of a number of interconnected base stations, each with a radius of up to 2-3 miles, that allow for handoffs from one base station to another as users move about a region or metro area. Additionally, WiMAX networks integrate technology designed to maximize the quality of service for each subscriber.

"By delivering the kind of open Internet experience that consumers previously only expected on a desktop PC, the Nokia N810 WiMAX Edition is a compelling example of how next generation broadband wireless technology will not only change the way people think about the Internet, it will change the very nature of the Internet itself," said Ari Virtanen, Vice President of Convergence Products for Nokia. "Much in the way that the evolution of the fixed Internet from dial-up to broadband enabled a host of new Internet services and changed people's expectations of what an Internet experience should be, the transition to a broadband Internet experience set free from the constraints of a fixed network will spark the next wave of new mobile Internet services, and will forever change the perception of what the Internet can be."

Along with a full featured web browser, powered by Mozilla, that takes full advantage of the Nokia N810 WiMAX Edition's large 4.13 inch touch screen and slide-out QWERTY keyboard, a variety of popular web-based services are also supported. Many of these applications can be found on Nokia's dedicated OS 2008 User Site. To keep connected while on-the-go, a number of Voice over Internet Protocol (VoIP) and Instant Messaging (IM) clients are available, including Skype(TM), Google Talk(TM), and Gizmo5, which can also take advantage of the Nokia N810 WiMAX Edition's built-in web cam for video calls. A client for the popular Rhapsody online music service is also available, transforming the Nokia N810 WiMAX Edition into a portable jukebox with millions of songs available to enjoy at a few taps of the screen. Beyond these well-known services, an active developer community has also emerged around the Linux-based Internet Tablet platform, creating additional applications - from games to productivity tools. 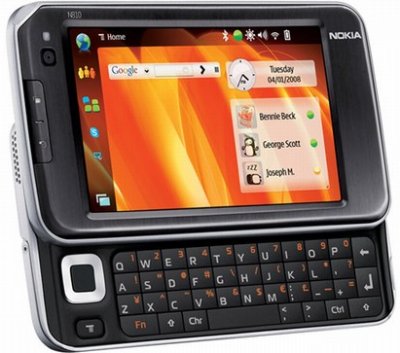 The internet tablet will be available in the U.S. this summer.