Posted on Wednesday, Apr 02 2008 @ 13:34 CEST by Thomas De Maesschalck
Leadtek has unveiled a new GeForce 9800 GTX graphics card today, just like most cards that were released yesterday this card has the standard clockspeeds. It has a 675MHz core, 1688MHz shaders and 512MB GDDR3 clocked at 2200MHz.

PX9800 GTX is designed for the new PCI Express 2.0 bus architecture, offering the highest data transfer speeds for the most bandwidth-hungry games and 3D applications. At the same time it maintains backwards compatibility with existing PCI Express motherboards for the broadest support. Furthermore, PX9800 GTX with NVIDIA HybridPower technology allows users to switch to the motherboard GeForce GPU when running non graphically-intensive applications for a silent and low power PC experience.

And when enabled with the updated NVIDIA PureVideo HD technology engine, PX9800 GTX delivers unsurpassed image quality on a display with resolutions up to 2560x1600 via Dual Dual-Link DVI output and HDCP support. This means hardware acceleration of HD movies and dual-stream picture-in-picture content for the ultimate interactive Blu-ray and HD DVD movie experience with spectacular picture clarity.

Last but not least, the new card is bundled with “Neverwinter Nights 2”, an award-winning adventure game in which every decision directly affects each character and the passage of time itself. This imparts a stunningly realistic impact to game-play, offering a true-to-life imagery in a fantasy gaming environment from PX9800 GTX. 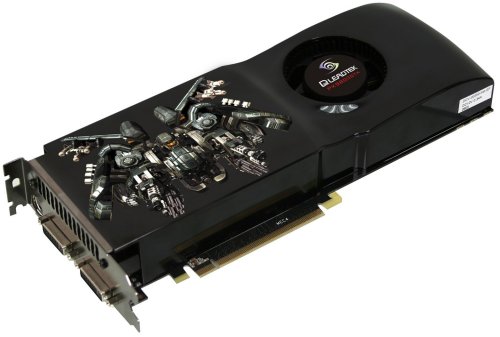