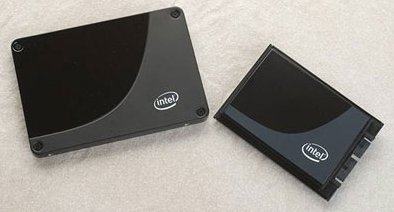 An Intel employee published a photo of two solid state drives from Intel at the Intel blog. The guy reports about his experiences with a pre-production model of the Intel SSD which he's testing in his notebook and says its noticeably faster than regular hard drives:

Although I was quite familiar with its capabilities from all the performance characterization data, I was unprepared for the powerful instant high it gave my system. It was such a dramatic difference in how my system responded that I found myself uninhibited in doing things that I previously would have shied away from.

I no longer aborted our backup client software whenever it launched itself (which is still at the most inopportune time possible, like when you’re in the middle of a presentation, since the ability of the IT software to detect the most inconvenient times to do things still appears to work perfectly), nor did I need to go for coffee while it ran. I actually continued working while it was running. I even ran it intentionally a couple times for fun to prove to myself that I wasn’t just imagining the fact that it had no noticeable impact on my system responsiveness. I no longer launched IE to do some surfing while Outlook loaded up in the morning (which of course only makes Outlook load even more slowly). This threatened to mess up my entire routine, not to mention my relationships with colleagues who I had been going to coffee with each morning while our systems struggle to make themselves useful.

I quickly got used to this new way of doing things and after a short while I started to think that this was normal. Then the day came that my SSD was retrieved for data mining (that was the whole idea behind the trial) and my original hard-disk was put back into my laptop. There’s no way to feel the pain quite as intensely as having to go back – and that is why I’m particularly frustrated more than usual and why I’m so frustrated lately.