Sharkoon introduces an ergonomic, height-adjustable cooling stand that provides users with a comfortable typing position and protects notebooks from dangerous overheating. The Sharkoon CoolBook 360 for 12-17 inch notebooks includes a swivel and adjustable notebook stand, allowing users to choose from one of four height settings. Two folding clips on the front of the stand hold notebooks securely in place. With the swivel function the Sharkoon CoolBook can pivot horizontally 360 degrees, which for example allows users to easily show colleagues the contents on their screens.

Through the use of the angled notebook position and the integrated 70mm fan, notebooks are protected from excessive heat. The fan connects via USB to the notebook, rotates at 2300 RPM and produces a virtually inaudible 20 decibels. The cable management system and storage compartment for the USB cable allow for easy and neat transportation of the device. The Sharkoon CoolBook 360 is made of lightweight plastic and at only 585 grams is ideal for on-the-go use. The device measures 320 x 300 x 25 mm. 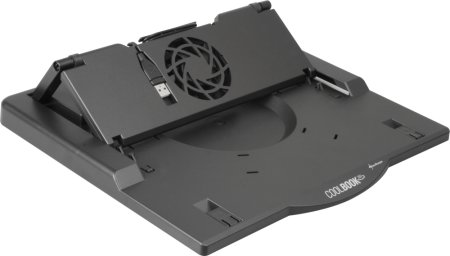 Sharkoon says the CoolBook 360 will be available in Europe for 15 euros. From the looks of it this cooler is exactly the same product as the JetArt Coolstand2 which I reviewed a couple of months ago but I expect the one from Sharkoon will have better availability in Europe.