The performance of the Point of View GeForce 9800 GTX EXO EDITION is pushed even further by increasing the core speed to 725 MHz, the shader processor speed to 1813 MHz and the memory speed to an insane speed of 2300 MHz! This gives you that edge you need without voiding any warranty, just 100% pure performance!

The 128 stream processors in the GPU are guaranteed to boost your system more than enough to play your favorite game on the highest resolution possible. Together with a great pricing level, the GeForce 9800 GTX EXO EDITION is definitely an interesting card for your gaming rig. Its 65nm GPU, a key element of the GeForce 9 series, has better power efficiency than previous versions and allows better clock speeds and performance. And if that’s not enough, the GeForce 9800 GTX EXO EDITION has support for both 2-way and 3-way SLI, for the ultimate gaming performance. 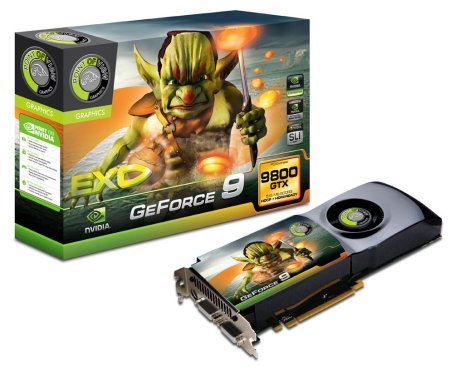