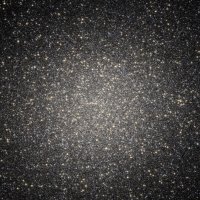 New results indicate there may be a black hole hidden in the omega Centauri cluster. One implication of the discovery is that it is very likely that omega Centauri is not a globular cluster at all, but a dwarf galaxy stripped of its outer stars, as some scientists have suspected for a few years.

Omega Centauri is the largest and brightest globular cluster in the sky. Images obtained with the Advanced Camera for Surveys onboard the NASA/ESA Hubble Space Telescope and data obtained by the GMOS spectrograph on the Gemini South telescope in Chile show that omega Centauri appears to harbour an elusive intermediate-mass black hole in its centre. "This result shows that there is a continuous range of masses for black holes, from supermassive, to intermediate-mass, to small stellar mass types," explained astronomer Eva Noyola of the Max-Planck Institute for Extraterrestrial Physics in Garching, Germany, and leader of the team that made the discovery.

Omega Centauri is visible from Earth with the naked eye and is one of the favourite celestial objects for stargazers from the southern hemisphere. Although the cluster is 17 000 light-years away, located just above the plane of the Milky Way, it appears almost as large as the full Moon when the cluster is seen from a dark rural area. Exactly how omega Centauri should be classified has always been a contentious topic. It was first listed in Ptolemy's catalogue nearly two thousand years ago as a single star. Edmond Halley reported it as a nebula in 1677. In the 1830s the English astronomer John Herschel was the first to recognise it as a globular cluster. Now, more than a century later, this new result suggests omega Centauri is not a globular cluster at all, but a dwarf galaxy stripped of its outer stars.