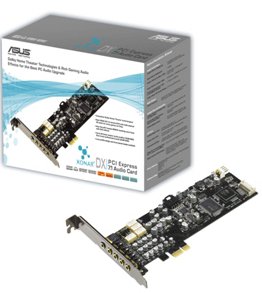 The Tech Report has written an indepth review of the $90 Asus Xonar DX audio card:

The Xonar DX differs from its D2X cousin in many ways, but some of those differences are more important than others. Take the audio chips used in each card, for example. The DX employs what's marked as an Asus AV100 audio processor while the D2X uses an AV200. Don't pay too much attention to the names silk-screened onto the chips, though; they're the very same C-Media Oxygen HD audio processor under the hood. Asus says the chips go through a "quality sorting" process to separate the AV100s from the AV200s.

Read more over here. The reviewer awards the Xonar DX with an editor's choice award and says it offers the best combination of features, performance and value of any desktop PC sound card on the market.