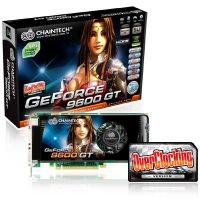 The overall performance of new CHAINTECH 9600GTC 512MB has raised about 15% compared with 9600GT for benefiting a wide array of 3D oriented applications, is born with the well-proportioned beauty of descent price and performance for power users.

Positioned to be the next star of performance graphics card in 2008, the light-weighted, single-slot CHAINTECH 9600GT 512MB OC Edition is considered an evolution of 9600GT advancing itself from 650 MHz core clock to 735 MHz with running on a 256-bit bus . The full-throttle memory solution GDDR3 512MB which CHAINTECH 9600GT 512MB OC Edition adopts now enables the card to run up to 1900 MHz.